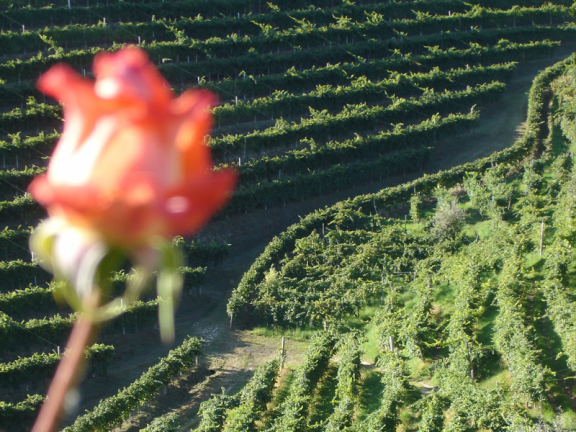 All of the vineyards are owned and located in Valdobbiadene: they are meticulously tended by Renato and Sergio and, given the orographic complexity of the hilly area right under the mountains, caring for them requires a lot of manual work. The well-proportioned combination of a land unique for mineralogical composition and microclimate, and the experience in producing sparkling wines reaches the excellence in quality in the sparkling wines branded Tanorè.
Tanorè works in the delicate Valdobbiadene area, on the borders between the small hamlets of Santo Stefano and San Pietro di Barbozza. This land comprehends hills, small valleys and steep slopes all sheltered on the north side by the pre-Alps, and bathed in sunshine all year round. The hill that houses the winery is the prized Cartizze, where grows the best Prosecco in the world. Of the world: because the Prosecco was born right here, in these hills bouncing between cascades of golden vines, from Valdobbiadene till Conegliano, where the world of the Guaranteed “Superior Prosecco” ends.
And the Cartizze is the Prince Hill of this little microcosm composed of 3,000 hectares of vineyards, because of its extraordinary and unique land that contains in its bowels the history of the world: between 20 and 15 million years ago this area was covered by a deep sea on whose floor stratified sands, clays and limestone levels. The rising of this seabed has brought to the surface these composite rocks that, due to the action of weather, vegetation and microorganisms have been transformed into the shallow sandy soil covering the Regolith (a mixture of sandy soil and rock). The particular characteristics of the Cartizze originate from this soil, rich in elements and history.
The remaining Tanorè vineyards are all located in the municipality of Valdobbiadene, and due to the great geological variety each of them have different characteristics. Hence the six typologies of Superior Prosecco of Valdobbiadene.

Glera, Prosecco, Cartizze: the importance of the name.

Glera is the name of the vine variety, of the plant producing the grapes from which the Superior Prosecco of Valdobbiadene and the Superior Cartizze are obtained. To enrich in perfume and fragrance the sparkling wines produced by Tanorè, between the rows of Glera there are few specimens of other grape varieties such as Perera, Bianchetta and Verdiso. These varieties improve the fair Prosecco’s personality with perfumes and precious lingering aromas, resulting well-proportioned and rich in shades ranging from floral, to more robust fruit hints. Renato and Sergio, for each of the six wine typologies they produce, choose the must with the criteria acquired in their experience and following the teaching of the great wine-masters of Valdobbiadene, including the unforgettable Luciano Ruggeri.

You can find out more about which cookies we are using or switch them off in settings.

This website uses cookies so that we can provide you with the best user experience possible. Cookie information is stored in your browser and performs functions such as recognising you when you return to our website and helping our team to understand which sections of the website you find most interesting and useful.

You can adjust all of your cookie settings by navigating the tabs on the left hand side.

Strictly Necessary Cookie should be enabled at all times so that we can save your preferences for cookie settings.

If you disable this cookie, we will not be able to save your preferences. This means that every time you visit this website you will need to enable or disable cookies again.